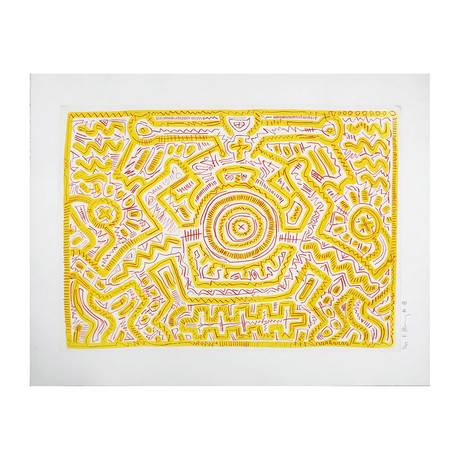 Sold Out
Login for Price

Keith Haring (1958-1990) was an American artist best known for his vibrant Pop art and impromptu street art creations that grew out of the New York City street culture of the 1980s. Between 1980 and 1985, Haring produced hundreds of these public drawings in dozens of cities around the world, and exhibited his work in over 100 solo and group exhibitions throughout his brief but influential career.

Harring's imagery has become one of the most widely-recognized visual languages of the 20th century. With bold forms and colors, his deceptively simple pieces speak to much larger political and social themes. In addition to being a foundational part of the neo-Pop Art movement, Haring was a social activist and prominent figure in the AIDS awareness movement, using his creations to explore concepts of life and death, war, police violence, sexuality, religion, and beyond.

Note: Customer has 5 days after receipt of goods invoiced herein to notify Touch Of Modern of any defects or issues. Failure to notify during that time period shall be deemed acceptance in full of the invoiced material by seller.

Close
You're qualified for

.
Would you like to add the current item to your cart? When you’re ready to buy, just select Affirm at checkout.
Continue Shopping
Please wait while we set up Affirm.